Over the years, Puerto Rico has attracted the very wealthy, who come for the postcard-perfect beaches and the promise of a tax-free life.

Many of them shelter their millions in local municipal bond funds, which have been hit hard of late as the island struggles with a weak economy, rising interest rates and outsize debt loads. For the Swiss banking giant UBS, which boasts that it manages money for half of the island’s millionaires — roughly $10 billion — the downturn has created a particularly nasty headache.

The bank’s clients had piled into highly leveraged bond funds run by UBS and were encouraged by its brokers to borrow even more money to invest in those funds. In some cases, money was lent improperly, exacerbating current losses, according to UBS employees in the region close to the situation, who spoke on the condition that they not be named because of a company policy against speaking to the news media.

Now, a number of UBS clients have been forced to liquidate hundreds of millions of dollars in holdings in these funds to meet margin calls. And the bank says it has begun an internal investigation into the lending practices of some of its top-producing brokers in the commonwealth.

Last week, after inquiries from The New York Times, UBS put one broker on administrative leave after claims emerged that the adviser had encouraged his clients to buy securities on lines of credit, violating the bank’s policy. Typically, customers use margin loans to buy securities on borrowed funds. Margin loans are governed by regulators and limit the amount of risk a customer can take on.

A spokeswoman for UBS, Karina Byrne, said the bank’s investigation was continuing, and added that the general weakness in municipal markets across the United States and Puerto Rico and apprehension about the direction of interest rates had contributed to steep declines in Puerto Rico funds.

Robert Mulholland, the head of wealth management advisers in the Americas for UBS, and other senior bank executives have descended on the island as the situation has worsened. “I would characterize this as the perfect storm,” Mr. Mulholland told a group of investment advisers last month in San Juan, according to a recording of that meeting reviewed by The New York Times.

UBS has had its share of embarrassments in recent years. It agreed to pay $1.5 billion last year to settle claims that its traders and managers had manipulated global benchmark interest rates for years. Around the same time, a former UBS trader was sentenced to seven years in prison after he was found guilty of fraud that prompted a multibillion-dollar trading loss at the big bank.

Also last year, UBS paid $26.6 million, to settle accusations by the Securities and Exchange Commission that the bank and two of its executives in Puerto Rico had made misleading statements to investors, which the agency said had concealed a liquidity crisis in UBS funds. 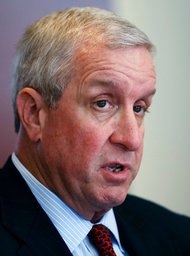 Shannon Stapleton/ReutersRobert Mulholland, the head of wealth management advisers in the Americas for UBS.

Puerto Rico, a commonwealth of the United States where residents typically pay no federal income tax, is regulated by the S.E.C. While other big banks do business in Puerto Rico, UBS is one of the few to have a large team of brokers on the island. The bank has five branches in Puerto Rico, with 132 brokers who manage money for the island’s elite, including local real estate magnates and wealthy foreigners. UBS often puts this money in mutual funds the bank itself manages. It can be a lucrative business. The broker and the bank get a commission on each sale, and the bank itself gets a fee for managing the fund.

For years, the bank’s funds had strong returns and paid healthy dividends. The Tax Free Puerto Rico Fund II, with $357 million in assets, has a five-year return of 6.8 percent, according to UBS documents.

But as Puerto Rico’s economic woes have deepened, UBS customers have seen the value of their holdings fall. The fund’s shares don’t trade on an exchange, but UBS documents show it had a per-share value of $6.16 in early September, down from $7.75 a share at the end of June. The fund’s value has fallen even further in recent weeks, according to brokers in the region.

American mutual funds have sharply reduced exposure to the island in recent months, according to the mutual fund research firm Morningstar. In recent weeks, UBS and Wells Fargo were among the banks that warned their brokers to steer clear of recommending Puerto Rican debt to clients. UBS has told them they need to affirm to the bank that they have warned clients who want to buy Puerto Rican debt about its risks.

UBS’s problems on the island have been aggravated by the use of leverage, on behalf of the bank and its clients.

“The losses can be, and usually are, very swift, especially when there’s limited or no liquidity,” Mr. Mullholland reminded brokers last month.

The funds UBS manages are themselves highly leveraged. For instance, the Tax Free Puerto Rico Fund II has a leverage ratio of 53 percent, meaning for every dollar of customer assets it holds, it has roughly another dollar of assets bought with borrowed money. UBS’s other Puerto Rico funds are similarly leveraged, according to firm documents.

The average leverage ratio on funds similar to UBS’s in the United States is roughly 22 percent, according to Morningstar.

In addition, many clients took out margin loans to buy into the funds. Other investors, according to local brokers and a lawyer representing some UBS clients who are considering suing the bank, were encouraged by their brokers to borrow on credit lines, which customers typically use to buy items like second homes or even to expand their businesses.

Most banks require investors who are given a credit line to sign a document saying they will not use it to buy securities. Instead, investors use margin loans, which are specifically governed by regulators and allow banks to more closely monitor what sort of risks their clients are taking on.

“When you add leverage on top of leverage, and then add more leverage, it usually doesn’t end well,” said Thomas R. Ajamie, a lawyer who frequently represents investors in financial cases.

UBS brokers who encouraged the use of credit lines had an incentive to do so. They receive commissions for securities bought on the credit line and make additional money if the customer uses the credit line.

“This is a scheme that is very questionable,” said Harold D. Vicente, a lawyer in San Juan who says he is representing 15 to 20 clients who he estimates have lost more than $50 million on UBS-managed investments. He said that UBS brokers encouraged some of his clients to take out credit lines to invest in funds, and that these clients did not sign documents saying they should not turn around and invest the money in securities.

Mr. Vicente said some of his clients drew checks from the credit lines originating in UBS’s bank in Utah. Those funds were then reinvested in UBS-managed funds in Puerto Rico.

Ms. Byrne, the UBS spokeswoman, declined to comment on that, but she said any client who used credit lines to buy securities signed documents saying they would not do so.

Mr. Mullholland told brokers at the San Juan meeting that the margin calls in Puerto Rico were “piling up” and that many of the funds were hard to trade because the market was fairly illiquid. In the event of margin calls, he encouraged brokers to search out clients’ most liquid assets “whether they are in the account or outside of the account.”